The coronally advanced flap (CAF) is a procedure frequently used in periodontal plastic surgery. The main objective of this surgical technique is to mobilize the gingival margin and reposition it at a level more coronal (incisal direction) than its original location. CAF is mainly used for the treatment of gingival recessions. The procedure was originally introduced by Allen & Miller in 1989, throughout time several authors proposed modifications to the original technique. You can find more information on when and why treat gingival recessions in this post.

The requirement for a considerable amount of vestibular space adjacent to the recession defect, is the major limiting factor of this procedure. Unfortunately, recessions are frequently associated with shallow vestibule and/or high frenum insertion. In such cases, it is important to discuss with the patient the need for additional procedures (vestibuloplasty and/or frenectomy performed before or after the CAF).

Several factors play a role in the outcome of recession coverage procedures. They can be divided in three categories: patient-related, tooth-related, and technique-related factors. Smoking, brushing technique, poor plaque control (plaque index >20%), biotype, and metabolic diseases affecting wound healing, are some of the patient-related factors that may preclude achievement of 100% root coverage. Root concavity, root prominence, and interproximal bone level are some of the tooth-related factors. For more information read my post on evidenced-based treatment of mucogingival defects.

Teeth are perfectly aligned in the arch, there is no loss of attachment in the interproximal area and recessions do not pass the mucogingival junction. This is a case that would be classified as Miller type 1 (recession not extending past the mucogingival junction). The major limitation of the Miller classification (Miller 1985) is not considering the patient-related, tooth-related and technique-related factors mentioned above. In this case the canine has a minimal amount of residual keratinized tissue (and no attached gingiva). If increasing the amount of gingiva present after the surgery is one of the goals of our therapy, we should consider perform a combined procedure (CAF + connective tissue graft) or using amelogenins (Emdogain).

The original CAF technique described by Langer and Langer (Langer & Langer 1985) included vertical releasing incisions mesial and distal to the treated defect. However this might result in scarring of the alveolar mucosa. Zucchelli (Zucchelli & de Sanctis 2000) proposed the use of a modified envelop technique, to try to minimize this complication. 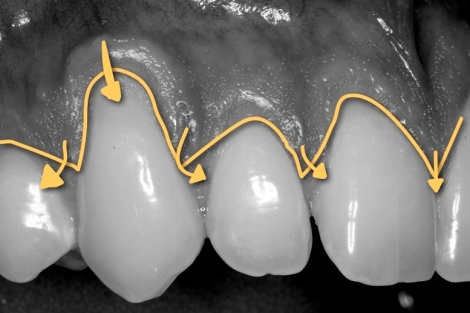 This technique allows to minimize scarring of the alveolar mucosa, and achieve better esthetic outcomes, at least when judged by a peer (Zucchelli et al 2009). 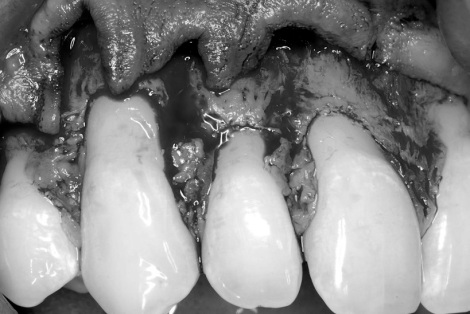 Flap reflected to the mucogingival junction

This topic has been debated extensively and we still don’t have a definitive answer. Recent evidence (Mazzocco et al 2011) seems to suggest that it does not really make a difference, at least when we harvest the graft using the Bruno (Bruno 1994) or the Lorenzana (Lorenzana & Allen 2000) techniques (that preserve the palatal periosteum on the graft). 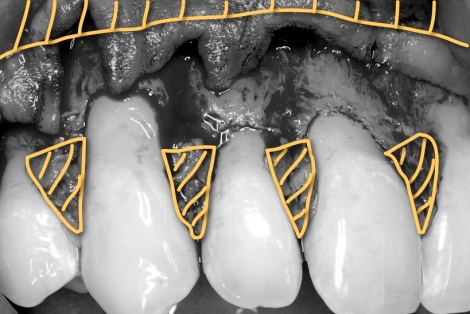 Split-full-split is the flap that I use for this procedure. I de-epithelialize the papillae, creating a split thickness bed for the surgically created papillae, I then proceed full thickness to avoid flap perforations and to preserve the periosteum. Past the mucogingival junction the flap is extended split thickness to allow coronal advancement. 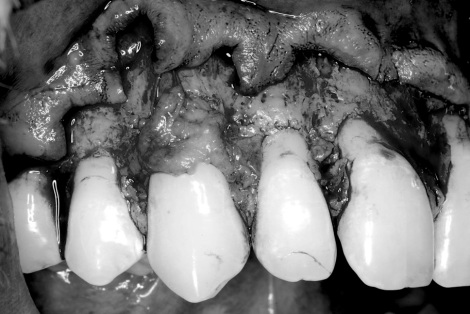 The use of a connective tissue graft will increase the chance of achieving 100% root coverage and more important, will favorably modify the patient biotype. The graft is sutured with absorbable single interrupted sutures (gut 5-0) to the mesial and distal papillae.

Step 5 – Repositioning the Flap and Sutures. 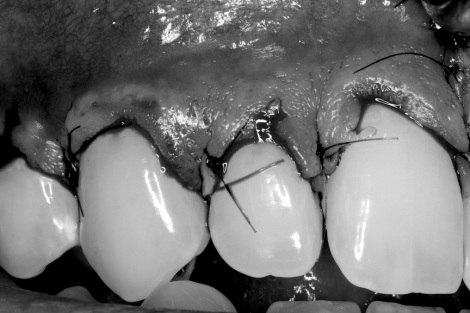 The level of coronal replacement of the flap plays a role in increasing the chance of achieving 100% root coverage (Pini Prato et al 2005). Ideally flap should be sutured 2mm coronal to the mucogingival junction. To help stabilize the flap in the desired location I use sling sutures (polypropylene 6-0) 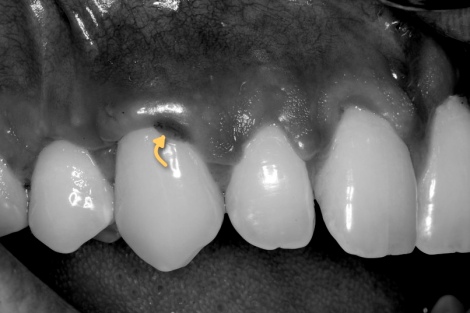 Sutures are removed after 2 weeks. The gingival margins moved apically~0.5mm and a portion of the connective tissue is visible (orange arrow).

Sixteen weeks after the CAF the gingival margin is stable.  100% root coverage has been achieved, as well as an increase in the attached gingiva in the area of tooth #6.