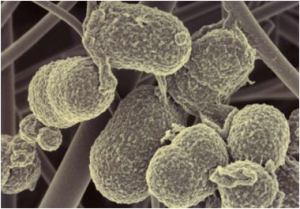 Prevotella Intermedia as seen at the SEM. (colorization technique)

Host Modulating Therapy is defined as:

Doxycycline has been used at non bactericidal doses (20mg twice a day) to control the host factors mediating periodontal destructions, in particular MMPs. The initial studies on this topic were done by Gotlub (Gotlub et al 1983) that showed that sub-antimicrobial doses (SDD) of minocycline reduced gingival collagenolitic activity. Several clinical studies (Preshaw et al 2004) have shown that SDD, when prescribed as an adjunct to scaling and root planing, results in significant gains in clinical attachment. Caton (Caton et al 2000) used it as addition during maintenance therapy and found it to be significantly useful for sites affected by moderate and severe disease and to provide better outcome in reduction of probing depth (PD) and gain of attachment. More recently Novak (Novak et al 2008) studies the effect of SDD combined with topical doxycycline gel. Although it is not possible to distinguish the effect of SDD alone (due to its combination with a topical form of doxycycline), the results of this study are encouraging. In fact patients in the experimental group had a significantly reduction in PD, bleeding on probing (BOP) and a significant gain of attachment compared to control. This was regardless of disease severity (beneficial effect for moderate and deep pockets).

What Do You Think? Cancel reply